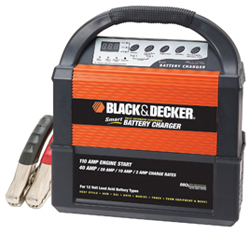 Every driver had a situation where car battery just goes dead and a jump-start is only a quick solution for the problem that may reoccur. The best solution for such problem is to use a Black & Decker VEC1093DBD Smart Battery 40/20/10/4 Amp Battery Charger or other similar product, but here we are talking about Black & Decker item.

The charger made by Black & Decker is fully automatic and electronic with a digital microprocessor control and modern LED indicator to control the charging rate. It has 3 stage automatic rapid charging operates at 40, 20, 10, 4 amps, on the average you can start your engine in 5 minutes using the this product and it takes 4.5 hour to fully charge the battery.

According to Amazon.com reviews this charger has a total of 42 reviews at the time we checked.

The majority of users ranked this item 5 stars (the highest possible rank), 13 – 4 stars, 2 users picked 3 stars and also 2 stars, 7 people who bought this item voted only 1 star, so let’s take a deeper look to reviews:

“This battery charger is very versatile and powerful for its size. I am a mechanic and it is nice to have all the features of a full size battery charger in a unit that will fit in my toolbox. Looks big, but is fairly lightweight. Highly recommended.“

„Very impressed so far. Used it to recondition 2 batteries and charge up 2 others and it has worked flawlessly. Never impressed with Black and Decker tools but I think they got it right this time. Time will tell and I would have given it 5 stars if it holds up for a few years.“

Also there is some not good reviews but in comments it‘s explained why, if you want to check the reviews, but here is the reason why the user gave only 2 stars and an expert answer:

„The reason B&D Doesn’t know a thing about this product is they inherited it from a company they purchased (vector manufacturing). This is a battery charger, not a float maintainer. The float feature is there in case you forget you left the charger connected so it doesn’t overcharge the battery. It also has a “jump start” feature as well, which it does not do very well either (it does not have enough power to jump start a vehicle), its just over driving the charger for a fast bulk charge for a short period of time. If you want a jump starter, buy a transformer based charger (not electronic high frequency type), that will give you 300+ Amps of engine start. If you want a float charger spend less money and buy a deltran battery tender (tried and true) or something you would trust leaving plugged into your vehicle 24/7. This is a lightweight residential grade (don’t expect it to run 24/7 for very long) battery charger and does what its supposed to do very well, don’t expect much else out of it.“